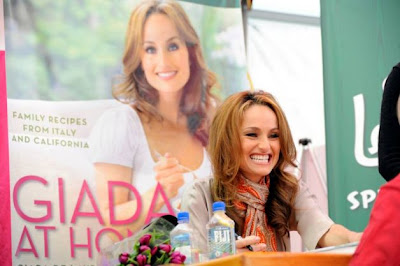 Photo courtesy stew Leonard's
I feel badly that I haven't posted anything here in a while. Truth of the matter is that I haven't made anything new, that hasn't already been on the blog, or my husband has been out and the kids and I have had simple dinners of soup or sandwiches. (Have to confess that I love dinners like that!)

How Can I have a food blog when I can't seem to put anything on it?! Terrible! I should be ashamed! I've been busy. I head into surgery in a week to repair my damaged shoulder. It's my left shoulder. I am, of course, left handed! This should prove to be interesting! Three weeks in a sling, three weeks where I won't be allowed to drive or use my hand... or type! How will I survive? Really!!! And the cooking, for some time coming, will have to be handled by others. My children are always wanting to prove themselves in the kitchen. Well, now they will get their chance!

The Food Network is on almost 24/7 in this house. If I am not watching, it is often on as background "music." My older two are familiar with all the celebrities and their shows. They are happy to sit and watch with me. Sometimes they will watch it on their own. Often they will watch and ask if we can make the recipe that is being showcased at that time. So when I had heard that Giada de Laurentis was coming to a town nearby, I thought it would be fun to bring Rebecca. (Christopher would have enjoyed it as well, but some mother-daughter time was over-due!)

Rebecca and I stood on line on Wednesday to meet the lovely and beautiful Giada de Lauentis who was signing her latest book at Stew Leonard's in Norwalk, Connecticut.

We waited on a very long line. Rebecca described it perfectly. ""It's like waiting on line for Splash Mountain on a really hot day without a Speedpass!" And just like the actual Splash Mountain ride, this line, in the end was totally worth it! Rebecca and I talked to all the other people waiting on line. We were easily amused and entertained and it really didn't seem as though we had been standing for two hours!

Finally it was our turn. I pushed Rebecca in front of my so that she would have the chance to speak with Giada! 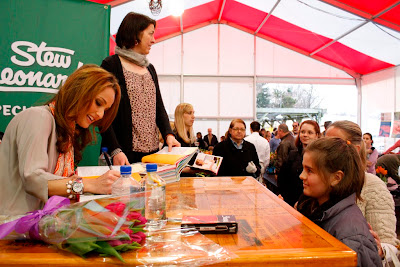 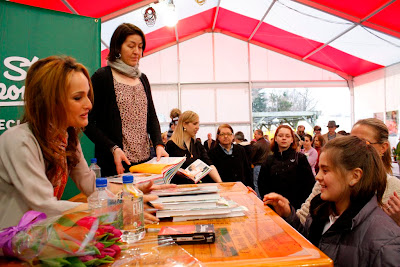 We purchased 4 books. Two for a friend, one for Rebecca and Christopher and one we had signed that will be auctioned off in conjunction with something else at the school auction, which I happen to co-chair. When she got to Rebecca's book Giada asked if she was Rebecca. She asked how old Rebecca was and what sorts of things Rebecca liked to cook. It was a short but sweet conversation between the two. When she looked up from signing Giada shone her trademark smile. I swear her pearly whites sparkled like they do in those cartoons! She has a large head of hair and she is petite, petite, petite! She personality truly resonates. She is captivating!

Click on any of the books below to order:

This sounds like so much fun! Rebecca will remember that day for a long time. Buddy went with me to an Ina Garten signing and still talks about meeting "the cooking lady". If only I could get him to cook a bit more too!

Good luck with your surgery. I'll be following along for updates.

What a fun outing with Rebecca ~ what a great mother and daughter memory!

i love giada....def my fave from FN. Get better soon!

So glad to know she has a wonderful personality off tv too. She is one of my fav's. Feel better soon!
xoJoy

Hi Jess, That was so great Rebecca got to talk to Giada. I love her style & joie de vivre!

I got to meet her in Atlantic City when she spoke & did a cooking demonstration. During the Q & A...I asked the 1st Question about what her hubby Todd does? She said he works @ Anthropologie...and was in the back of the audience.
During her talk she said her name means Jade, in Italian & she was thinking of calling her baby "Jade"...but wasnt sure. When I met her afterwards I said...The name Jade is beautiful...go for it. She named her little girl, Jade! She thanked me for asking the 1st question. I also asked her about East Coast/West Coast life. She was on Today NBC at the time. She said she wanted to stay on West Coast after the baby...
She is soooo petite & says she only eats bites of food...small portions...
Do you know Robert Irvine..Dinner Impossible.He lives in our area, I've met him & George Galati went to same gym as me.
Will I praying for your surgery & recovery! xoxo Jennifer aka Gigi