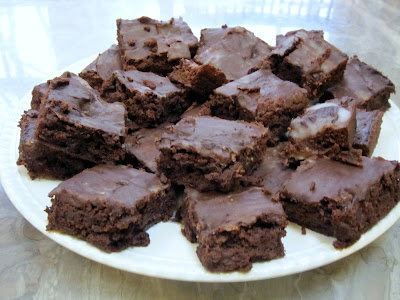 How do you make an incredibly rich brownie even richer? Simply add a few Junior Mints into the batter and some After Eights on to the top! After the brownies have been in the oven for half their cooking time, simply take a movie theater sized box of Junior Mints and strategically place the candies on the batter. The Junior Mints will start to melt and sink in. Once the brownies have finished baking, remove the brownies from the oven and turn off the heat. Place the After Eights over the top of the brownies and place them back into the oven for a minute or so, so that the chocolate melts. Remove the pan from the oven and then, with a rubber spatula, spread the chocolate so that it forms an even layer over the brownies. Set aside and let harden. (You might want to toss these in to the fridge for a short while to speed up the process.)

Wait until the brownies have fully cooled before you cut into them. And in this case, these brownies are better when eaten cooled and the top has had a chance to harden.

This is my favorite brownie recipe!
One Bowl Brownies -- These are really fudgy!

Preheat your oven to 350 degrees and grease your brownie pan.

Microwave chocolate and butter in a large microwaveable bowl (not plastic!) for about 2 minutes, until butter is melted. Stir butter and chocolate until you get a smooth mixture. Stir in sugar and vanilla. Stir in flour. Pour and spread in to your prepared pan.

Bake for 30-35 minutes until toothpick inserted int he center comes out with fudgy crumbs. Do not over bake. Cool in pan on wire rack.
Posted by Jessica Ryan at 7:24 PM
Labels: After Eights, brownies, Junior Mints, mint brownies