(Reposted from December 30th post at The Entertaining House) 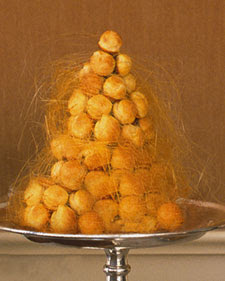 Image courtesy Martha Stewart
As a child who summered with her Jolie Grandmere in France, well not just France, but Cannes, I was privileged to so many wonderful experiences that most would think would be wasted on a young child. But I was not a typical young child. I was an only child living in Manhattan attending the Lycee Francais de New York on 72nd street right off Fifth. By 5 I had mastered the French language and was completely bilingual. My parents both worked and were hugely successful. My father shone in the world of banking and my mother made quite a name for herself in the world of public relations where she headed the department for the Whitney Museum long before PR was fashionable and en vogue. My mother, much like my grandmother, was ahead of the times. So this only child lived in an adult world. This is not to say that I did not have friends my age. I did and plenty of them. But I was also immersed into a very grown up and sophisticated world. And even at a young age I adored it!

That world could not be any more different than the world my children live in. The craziness of three running amok in a large house in suburbia is quite the contrast! But I wouldn't have this life any other way.

My mother and I summered in France, in Cannes, with my grandparents Bettina and Larry. I lived in the lap of luxury quite unaware that there should be any other way to live. We spent our days on the private beach club, Bijou Plage and spent the afternoon at my grandparents house up in the mountains just a few miles away. We drank tea and ate wonderful pastries. These afternoons were relaxing and almost lazy. My grandmother would read my tea leaves and make up wonderful images from the leaves that had deposited creatively along the insides of my cup. I'd swim in the pool and play with my mother and my dolls. Life could not have been more perfect. And I am pretty sure, that even in my youth, I was aware of this. My summers in France are as crystal clear today as they were yesterday.

I was a well behaved child. My grandmother worked hard on my manners the summer I was 6. At 6 she thought that I was old enough to look a grownup in the eye when spoken to, shake hands with my elders and curtsy to royalty. We practiced these skills all summer long. Yes, I met quite a few dignitary and my curtseying skills were perfected. My grandmother would reward me (read: bribe!) every time I mastered one of these skills.

When she came to visit me in New York the following fall she had a suitcase of small trinkets that were my rewards. I believe there were 21 items in all. One item, a small navy silk scarf resembling a bandana, I still have today!

Image was everything to my grandmother. Image was more than what you wore. It was how you acted and how you spoke. A smile was equally as important as the neatly combed hair, as the well pressed smocked dress and shiny black patent leather Mary Janes.

Because I was so well behaved I was allowed to accompany my parents to many wonderful restaurants. I had two favorites. One was called Vesuvius and the other was The Blue Bar. One could bring dogs into restaurants and it was not uncommon at all to see a dog lying down at the foot of his master. Bettina often brought Ballyhoo and Tipperary, her Kerry Blue Terriers.
At Vesuvius I would order Spaghetti Carbonara. The waiter would bring this great enormous bowl of pasta, and at the table would crack an egg (or was it two?) onto it and promptly mix it in. I thought this fascinating and fun. And it was delicious to boot!

But my most favorite childhood restaurant was The Blue Bar. On the famed Croisette this restaurant sat, well hustled really. I know we ate dinner before dessert but I remember nothing about the food, just the sweets. Perhaps that was because Bettina always insisted the food to be mediocre but the desserts outstanding. Perhaps we only went for dessert. I really cannot remember. What I remember were the most incredible desserts I have had in my life. I remember my first experience with Oeufs a la Neige (Eggs in Snow). This incredibly fluffy and light egg white meringue that floated so elegantly in a sea of creamy vanilla custard sauce. Incroyable!

Below is the definition per Epicurious:

floating islands
1. A light dessert of stiffly beaten, sweetened egg white mounds that have been poached in milk. These puffs are then floated in a thin CUSTARD sauce. The dessert is also known as oeufs à la neige , "snow eggs." 2. In France, île flottante ("floating island") is LIQUEUR-sprinkled sponge cake spread with jam, sprinkled with nuts, topped with whipped cream and surrounded by a pool of custard.

I had totally forgotten that it was also called Ile Flottante!

My other favorite childhood dessert is the subject of this post. I was first introduced to it at the Blue Bar, but my grandmother would create it for decades to come for festive occasion. I also served the croquembouche at my wedding in lieu of a wedding cake.

After dinner the waitstaff paraded out of the catering tent into our tent, each one carrying his own croquembouche. Each table would have their very own, and a larger, more delicate version dressed with a great big confectionary bow would make it's way to the Bride and Groom. It was a grand and dramatic entrance perfect for a grand and dramtic dessert!


Croquembouche, as defined by Epicurious:

[kroh-kuhm-BOOSH]
French for "crisp in mouth," this elaborate dessert is classically made with PROFITEROLES (tiny, custard-filled cream puffs), coated with CARAMEL and stacked into a tall pyramid shape. As the caramel hardens, it becomes crisp. For added glamour, the croquembouche can be wreathed or draped with SPUN SUGAR.

Martha Stewart has recreated the dessert to perfection. For more information and instructions, click here. 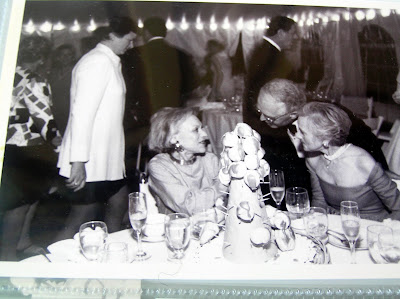 The Remains of the Day
La Jolie Grandmere with my mother with what remained
of the Croquembouche at their table!

Please note that a Croquembouche is not generally assembled on a cone as pictured above, but each Croquembouche would have been too massive for each table
and we needed some filler!

Why not serve up a Croquembouche for your new Year's Eve party? It's delightful with a lovely champagne or light and flippant prosecco!
Posted by Jessica Ryan at 12:53 PM
Labels: champagne, croquembouche, desserts, prosecco

What wonderful memories of your childhood and your family. I enjoyed reading it so much...hopefully you have a journal to preserve these memories for your children.