Forgive me if you read both my blogs and saw this post already. But I love this little guy! I made it last year for Alexander's class party. He loved it so much that he asked for his "Dragon" (it's really a gator!) as Birthday cupcakes for his class party tomorrow. (Was supposed to be last week but both boys were taken ill.) 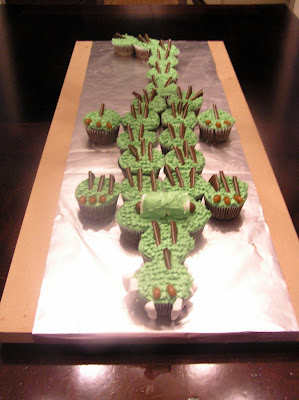 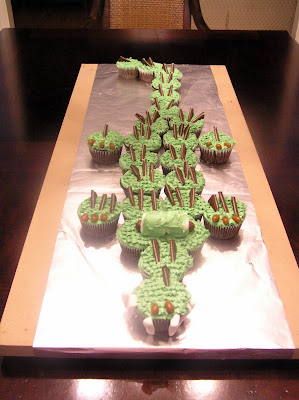 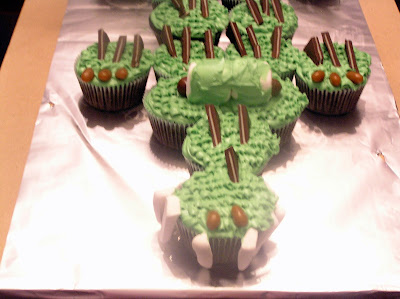 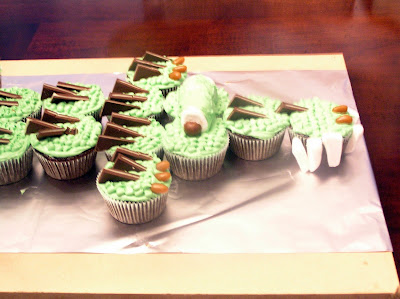 I just love this guy! I got the idea from my Hello Cupcake cookbook. It really is easy and requires only a few basic items that are readily available. I used 2 cans (1 1/2 really) of white frosting that I colored green and 1 box of cake mix. I spread the frosting on each cupcake with a spatula, then piped the scales on afterwards. The teeth and eyes are made of marshmallow. The eye balls are Junior Caramels. The claws and nose are made from Sugar Babies. (Called for Banana Runts and jelly beans but I had a hard time finding the runts and didn't want a box of jelly bellies lying around.) The scales were made by using Andes Mints (because I could not find the square cookies that were suggested) each rectangle cut in half. After Eights would be great and Hershey squares work well too. If you like to bake but don't have a ton of time to dedicate and have kids you ought to pick up a copy of Hello Cupcake!

I made the Slumbering Children and the Spaghetti and Meatballs featured in the book... I even got a comment from one of the book's creators!
Posted by Jessica Ryan at 6:35 PM
Labels: cake, decorative cupcakes, dessert

That would be great to take to my kids classrooms. Great idea and post!!!

LOL you had the wardrobe! Eagles Eye was out of Philadelphia, you might of even had some and not realized it as it blended with all prep looks. xoox

That is the cutest thing I have ever seen!

We love, love, love it. You are so lucky to have such a talented mom. Really, it looks like an amazinmg dragon.

Karen and Alan from Hello, Cupcake!

Hey Jess, my 7 year old saw this a little while ago and I thought she would hyperventilate! She thought it was "SO COOL!"