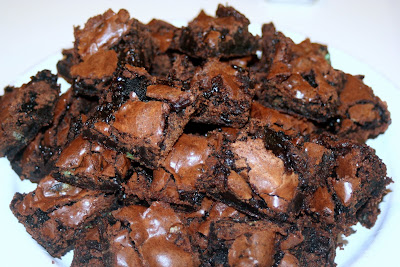 So I had to try a little experiment just to see what would happen when you added America's favorite cookie into your brownie mix! I took about a half a box of mint Oreos and handed them off to Alexander (my 4 year old) to mash with a fork in a bowl. While he mashed I prepared the brownie batter. (You could absolutely use a boxed brownie recipe for this. I was going to but I had run out!) Once the batter was ready we added the crushed Oreos and mixed them well into the batter. I poured the brown ooey goodness into a brownie pan and baked in the oven for 33 minutes. (I opted for 33 because the directions said between 30 and 35 minutes!)

After 31 minutes had passed I began to notice a burning smell coming from the oven. Oh no! I couldn't possibly have ruined them, could I have? Well... anything's possible! When I opened the oven I saw that the batter his risen and bubbled and some indeed poured over and into the oven. Luckily the brownies still looked in tact. I used a rubber spatula to push the *overflowing brownie mixture back into the pan. After about 30 minutes I cut the brownies. I should have waited longer. I put the batter into the freezer for a few and cut them again. I really wanted to make star shaped brownies as it is America's Birthday, after all, but I didn't want to press my luck. Little squares would have to do. After about 15 minutes I took the brownies out of the freezer. These are certainly not the prettiest brownie I have ever made but Oh. My. God. are they good!!!

Let cool at least 30 minutes before cutting. Or place in freezer for 15 minutes prior to cutting into squares.

*I'm pretty certain that the addition of the 2 cups of flour would have kept the batter from bubbling and overflowing!
Posted by Jessica Ryan at 12:18 PM
Labels: brownies, Oreos