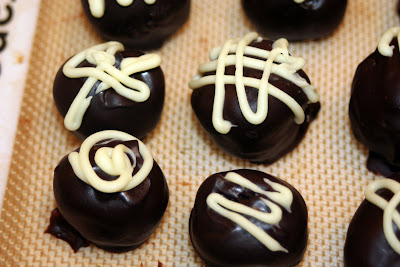 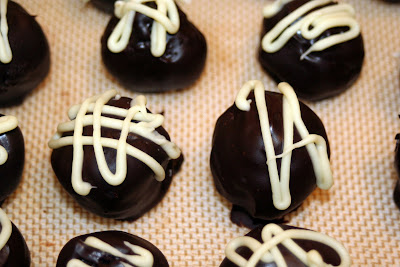 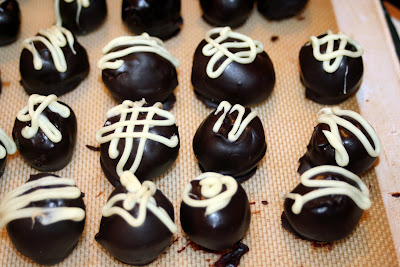 So I was tinkering. I tend to tinker. I can never leave anything alone. I made some brownies. I used a small circle cookie cutter to cut them so that they would all be the same size and so they would look a little prettier, more festive if you will, than a regular square. And then I rolled one. I've made brownie balls before and they are quite good. But I wanted to do something to this little ball. And I wondered what it would be like dipped in chocolate. Would it be good? Decadent? Too rich? So I turned all the little circles into balls. And then I made a ganche of sorts. I say of sorts because most recipes call for cream and I had none. I had nothing but 1% milk.

I made a double boiler by placing a metal mixing bowl on top of a pot of boiling water. When the bowl got hot and the water started to steam I turned the heat down and added my bad of chocolate chips. I then added some milk, slowly, a little at a time. I would guess a total of 1/4 of a cup and let it temper (warm) on the melted chocolate and beat it in so the chocolate formed something resembling a rich chocolate putting.

Using a skewer I placed the brownie ball in the chocolate and made sure it was well covered and then placed the chocolate covered brownie on to a cutting board that was covered with wax paper. When there was no more room I set the balls in the fridge to chill. (Freezer is good too, but mine was stuffed!) When the chocolate set and then drizzled some white chocolate over the top to cover up the imperfections and create fun patters.

I made my simple designs and returned the balls into the fridge to harden again.

These brownie balls are not only pretty, fun and festive but they are delicious, completely decadent!

* Wax paper or other nonstick surface

Very clever and creative...they would look wonderful on a cookie platter.

yumma yumma. i think we will def be giving this one a try.

I would be popping (I first wrote pooping by accident!) these left and right!

I attempted cake balls...the first try from a box mix was a failure. If I don't like them then we know they are really bad! I am making coconut cupcakes today for a friend's birthday and will try with the homemade ingredients and dip in white chocolate.

You don't call them balls, you call them truffles. Well, I don't because it makes me sound like I can cook!

I would like to thank You for being the member of this website. Please allow me to have the opportunity to show my satisfaction with Host Gator web hosting. They offer professional and quick support and they also offering many [url=http://tinyurl.com/gatorcoupon ]HostGator discount coupons[/url].

Moncler Outlet a large number of The Su Hongye in Chongqing something, can not return in,[url=http://www.giubbotti-moncleroutlet.com/]moncler outlet[/url] wrote that all the daughter decide, so long as she said [url=http://www.giubbotti-moncleroutlet.com/]moncler outlet[/url] the research. the foreign flavor from the new people are very against [url=http://www.giubbotti-moncleroutlet.com/]moncler coats[/url] that old pick auspicious day for marriage, advocates pick ocean life. the most unfavorable marriage Gregorian calendar in May, the Gregorian calendar in June is better marriage, but they're already engaged in June, the so extended to early September wedding. It is stated too much attention to date,Monday 23 is a great day for marriage, especially on Wednesday; 4,561 days like a bad day, as a result they pick on Wednesday smiles: must have been that guy to come out of Yuen Long Cao tricks. Mei smiles: short, you hate the European students, pattern names up. Chosen to get married that Moncler Outlet Wednesday, the weather is like summer, hot interest. The way I wanted, Jiao days Fortunately, today I did not do groom. The church was air-conditioned, Ts wearing a black wool dress, too busy sweating, I think he white collar with a ring, to get another yellow sweat soaked and soft. I afraid the entire of his plump body In Khan, the way the candle right into a pool of oil. Miss Su is also tight ugly. fall into line at the wedding, bride and groom smiling face, no expression of Ku Buchu, all unlike the dry wedding, but instead no, not on the scaffold, is really a, is, like Moncler Boots a public host to pickpockets signs with punishing those hardened criminals hard. I happen to believe that I own marriage ceremony, under those thousands of Kui Kui like to be inevitable cracked pickpockets. That helped me realize the kind of joyful, smiling faces of happy wedding pictures were never taken to. find! Great find! I'm thinking about is to see how you like her the same day. avoided her to not see, just say several words with Miss Tang - chien hop heavy heart that, like truck unloading the parcel the following smash gravitropic only strange Xinmei won't hear - would be a bridesmaid your day, saw me and Moncler Scarf inquired about to not fight, said the ceremony complete line, we sprinkle colored paper Fou new body, when, in support of I will not have hands, afraid which i go ahead and take chance to throw hand grenades, nitrate sulfuric acid spill. She asked me later on plans, I told her to visit Sanlv University. I believe she may not wish to hear your company name, and so i did not mention a thing you.

more information you can go to http://www.giubbotti-moncleroutlet.com