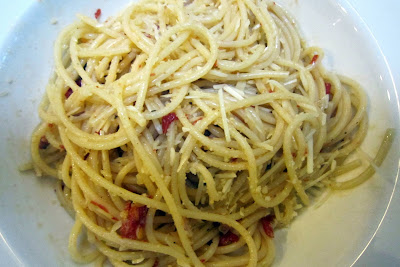 We've been eating a lot of pasta here lately. Our grill died. It's cold out and I don't have the energy to cook heavy meals. This dish reminds me of one I would eat in Italy. My grandmother had fabulous help in Agnese. She kept a great house and she was a fabulous cook. Mostly what she cooked came straight from the gardens on the property. But sometimes what we crave is not available or in season. I learned to love canned tomatoes. Especially San Marzano tomatoes. Agnese used a lot of olive oil and garlic and lemon. I tend to use this combination a good bit too. Throw in some basil for good measure because I like it and because it is in my fridge and I don't want it to turn bad and it will if I don't use it in this dish.

I took the San Marzano tomatoes from the can and removed the seeds and drained them the best I could. Then I placed them on a drying rack that I placed on a cookie sheet that I should have lined with aluminum foil... but I didn't.. Oh well.

I sprinkled a very generous amount of sea salt on the tomatoes and set them in the oven for about an hour and a half at 325 degrees. I watched the oven closely. You do not want to burn your tomatoes. After a half hour or so I turned the tomatoes over. The goal is to get your tomatoes to dry out. I wish I had used two cans. Next time I will. These were so delicious! 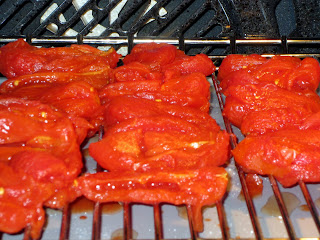 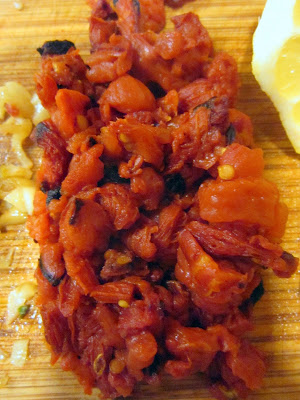 While the tomatoes were cooking I took a cup of oil and put it in a saucepan over high heat. I tossed in 4 cloves of garlic, some lemon peel and a small handful of basil. When the oil started to bubble I removed it from the heat and let it sit for an hour or so. 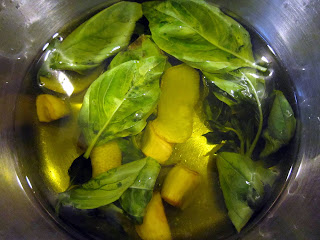 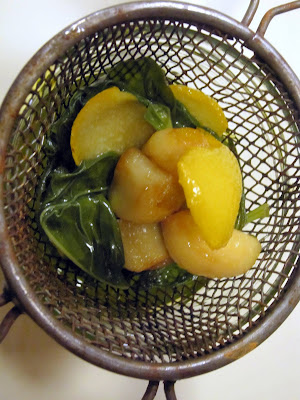 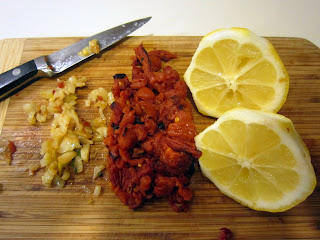 When the spaghetti was was done (cooked per directions on box) I drained it and returned it to the pot adding the juice from the lemon and about 1/4 Cup of the olive oil, chopped garlic and tomato. I added some salt and tossed well. Some fresh Parmesan was all it needed for the finishing touch.

Making this for dinner tonight!