This Shandy is Dandy! 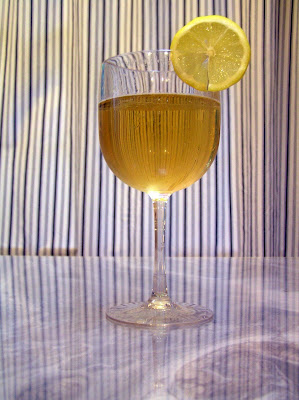 I spent many years in Europe in my youth. My grandparents had homes in the South of France, Oxfordshire and Umbria. (Not all at the same time!)

I spent two of my teen years in the UK at a strict boarding school. I hobnobbed with Celebrity, Royalty and British Blue Bloods. Truth be told, save for a handful of lovely girls I hated my time over there. I was miserable and terribly homesick. In retrospect, I should have gone when I was a bit older, in college. But I didn't. Despite hating my school, I was able to have some great experiences over there. Many of which involved alcohol. The drinking age there was 16, I think. Otherwise it was 18, but a 16 year old could still get a drink without batting an eyelash. Many of my school days were spent drinking wine and sneaking Silk Cut Cigarettes. I think I secretly wanted to get caught and tossed out of the school. But that never happened. I never even got reprimanded. Instead, I think they felt sorry for the "Little American Girl."

A drink that is served in Europe (all over) is the Shandy. It is often sold in a bottle or a can labelled Shandy. In essence a Shandy is a mixture (or equal parts) beer and either sparkling lemonade (7-up or Sprite would be a good substitute here in the states) or gingerale. It's a wonderfully crisp, light and refreshing drink.

I have never been much of a beer drinker. Every once in a while I like a nice Stella Artois or even Bud Light. These are perfect beers to use to make a Shandy as they, on their own, are crisp light and refreshing.

In France, the Shandy is called Panache. (Pronounced pah-na-shay) Isn't the French name so much more elegant. Does it not reflect a beverage you would proudly serve in a wine glass? Add a splash to the Panache and you have a beverage called the Monaco. Even more elegant! (I'm off to get some grenadine today!) Excuzer moi, voudrais vous une Panache ou un Monaco avec votre petite dejeuner?

To make your Shandy you'll need:

1 bottle of good, crisp, clean beer such as Stella Artois or Bud Light
1 bottle of gingerale, or
1 bottle of 7-up
*a slice of lemon or lime (and a squeeze as well!)

* My personal touch
In a large wine or pilsner glass pour equal parts gingerale or 7-up and beer. I suggest pouring beer first to cut down on foamy overflow. I urge you to try this beverage that is both sweet and sassy!

This drink was inspired by this post over at The Entertaining House!
Posted by Jessica Ryan at 4:52 AM
Labels: alcoholic beverage, beer, Monaco, Panache, Shandy

OK, we really need to meet for cocktails on day in the near future!

How much does that serve? You know I'm always looking of punchy type cocktails for parties.

Oh, dear. You reminded me of a camping trip where we were making "Power Shandys", with Mike's Hard Lemonade or Smirnoff Ice instead of the 7-Up or ginger ale. Good times. I think.