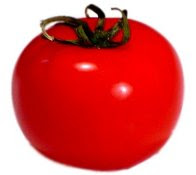 Gazpacho is a cold, tomato-based soup that was popularized in the Andalusian area of Spain. It is now synonymous with Spanish cuisine. I love gazpacho and we gobble tons of it up in the summer months. I decided to try my hand at a grilled veggie version and I was pleasantly surprised with the results. Grilling the vegetables adds a certain sweetness (from the caramelization) to the soup. It has a more delicate bouquet.
1 medium onion sliced -- not too thinly!
1 red pepper, sliced
1 orange pepper, sliced
1 yellow pepper, sliced
4 tomatoes, *blanched, peeled and quartered
1 English cucumber (or 2 regular cucumbers) peeled and cut into chunks
Juice of 1 lemon
2 cloves of garlic, minced
sea salt, to taste
crushed red pepper, a couple shakes!

* Place onions on grill (this also works well on a good nonstick fry pan with a little non-stick cooking spray) and cook until lightly browned. When sufficiently browned set aside in a bowl.
* Repeat above with all the peppers.
* Meanwhile, make a small X in the bottom of each tomato and place in boiling water for 30-60 seconds, remove and peel skin. (You will see the skin start to pull away where you have made your X. This process of quickly steeping the tomatoes in boiling water is called blanching.) Cut the tomatoes in to large cubes or quarters, and place in food processor
* Place cucumber, minced garlic, lemon juice, salt and red pepper in food processor.
* As grilled veggies start to cool down place in food processor. Once all the ingredients have been placed in the food processor start to blend until you reach your desired consistency.
Chill for at least an hour before serving. Water will separate and this is totally normal. Just carefully stir the soup. Garnish with sour cream and a cilantro leave or fresh croutons. This is a great soup to have if you are minding your mid section!
(Forgive me for not posting a photo of the soup but I had accidentally deleted the two I took with the camera and unfortunately did this the day after we made the soup and there was nary a drop left to be found anywhere!)
Posted by Jessica Ryan at 12:21 PM
Labels: soup, tomatoes, veggie