Banana Bread with a Twist ... of Cinnamon! 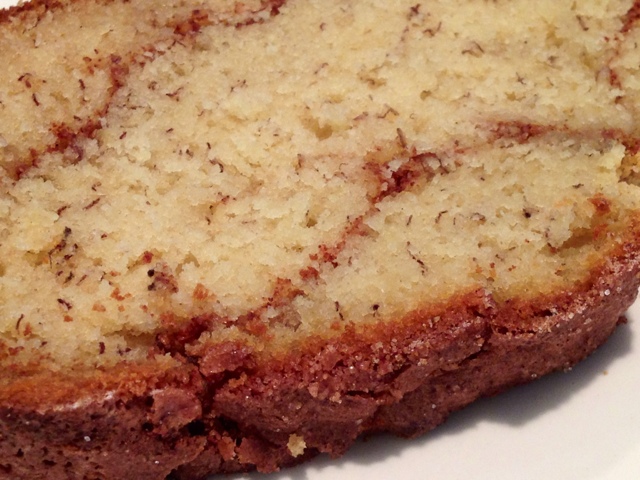 My ALL TIME favorite Banana Bread recipe is one I found a year or so ago. It's Emeril Lagase's. It's super banana-y and has a richness from both butter and sour cream. (I saved a few calories using light sour cream!) But trust me when I say you have not had banana bread until you have had this banana bread. The original recipe called for walnuts and I used them but I'm really not a nut person so I left them out of this batch. And I was putting all the ingredients into the mixing bowl, I realized that, gasp, I was out of vanilla. So I decided to add some cinnamon in swirl form to compensate. It was fantastic!

Preheat the oven to 350 degrees F.
Lightly grease a loaf pan with butter or a non-stick spray
Beat the bananas, sour cream, eggs, butter and sugar in an electric mixer.
Add the flour, sugar, baking soda, baking powder and mix well.
Pour approx 1/3 of the mixture into the loaf pan, and coat well with cinnamon sugar. Repeat in 2 more layers, adding cinnamon sugar each time.
Bake until lightly browned and bread bounces back to the touch, about 55 minutes.
Remove from the oven and cool for 10 minutes before turning out onto wire rack to cool completely.
Posted by Jessica Ryan at 7:15 AM
Labels: banana, Banana bread, cinnamon