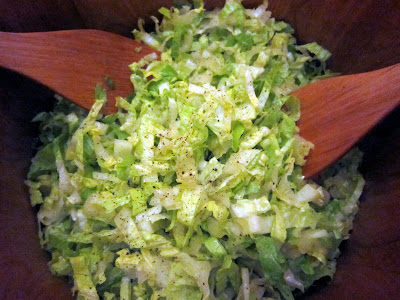 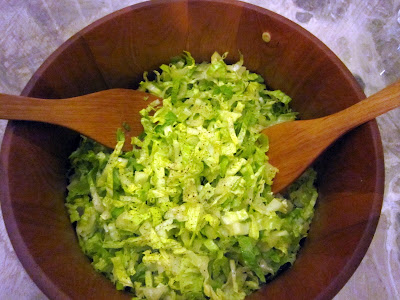 A simple supper. When we were in Italy we had bread and salad every day we were at the house for lunch and went out for large, lavish dinners at local, wonderful eateries in Umbria and Tuscany. My grandmother had wonderful help in Agnese who looked after the villa in the months my grandmother wasn't there and cooked for her when she was there. Her meals were simple and spectacular. Most of the ingredients were local -- from my grandmother's garden!

One of my favorite salads could not have been more simple to make and bursted with flavor. It was a shredded salad with romain, radicchio, olive oil, vinegar, sea salt and pepper. We call it Insalata d'Agnese since it was Agnese who created it.

Insalate d'Agnese
You'll need:
3 heads of Romain trimmed and washed
1 head of radicchio, trimmed
1/2 cup of olive oil and 1/4 of vinegar -- feel free to add more or less vinegar to your liking
generous amounts of freshly ground pepper and sea salt
(Use only what you desire, the rest will remain well for a week or so in a glass jar or cruet.)

Shred the lettuces and arugula and toss into a large salad bowl with oil, vinegar, salt and pepper. Can't be more simple! I love the red and green color, but alas my three little ones find the radicchio a bit too bitter so we omit it for them.

In Italy we ate this with loads of fresh bread and artisan cheeses. Sometimes we do here in the states as well. But the other night I had a full baguette that was a bit stale. I cut the baguette into slices and made little toasts so as not to have to waste the bread. 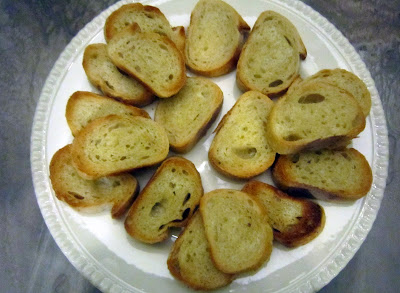 Slice the baguette into 1/2 - 1 inch slices
using a pastry brush, brush on olive oil
sprinkle garlic powder generously OR rub a clove of fresh garlic onto each slice
sprinkle lightly with sea salt
place under broiler (high) for a few minutes and watch as the toasts turn a golden brown 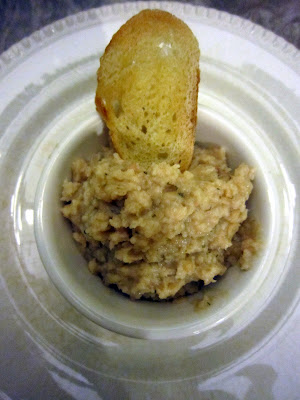 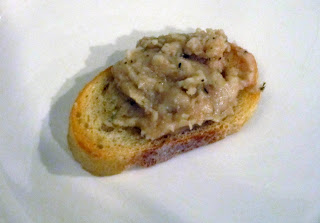 And these go wonderfully with the Tuscan White Bean Spread

1 can of white beans, drained and rinsed
3 tbs olive oil, plus 2 more
2 - 3 cloves of crushed garlic
squeeze of a half a lemon
Salt and pepper to taste

In a large saute pan add olive oil, beans and salt and pepper to taste
As the beans start to get golden stir them around -- They will get soft, this is what you want.
When beans get golden add the *garlic and stir... keep cooking until garlic turns golden brown too
Place the beans in a mini food processor with the rest of the olive oil and lemon
Puree until smooth -- feel free to add any more of any ingredient

*If you do not have any fresh garlic, use about 1 tsp of garlic powder
Serve warm with the toasts -- May be microwaved to reheat
Posted by Jessica Ryan at 6:39 PM
Labels: bread, garlic, lemon, lettuce, olive oil, white beans

My mouth is watering - I am printing this recipe off now! Thank you for sharing~ xoJoy

Oh yum! My mother use to make a salad like this. Thanks for the reminder ~ I'll be adding this to our menu.