We love the flavors of Cuban sandwiches... my kids really love anything with ham and pickles, so when I first introduced these I knew they would be a huge hit. In my version I use no pork, but I do use a good Kosher dill pickle and seeded Jewish Rye bread which makes this sandwich a close cousin to that fella, Reuben!

You can take this Jewish girl out of the city, but you cannot take the city out of me! The best delis in New York (for the most part) are Jewish. They make the best sandwiches E-ver.

Yesterday the boys were home from school for lunch. Alexander has half days on Wednesdays and his brother had Pink Eye... I use that term loosely, more like a pink eye (there is such paranoia surrounding eyes that are not white white white... Anyhow, my oldest had a hankering for our version of a Cuban, so I headed out and got what I needed. The boys had an indoor picnic with lemonade and a few potato chips thrown into the mix! 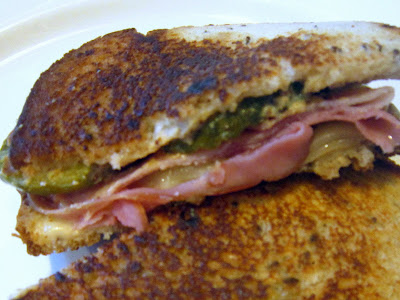 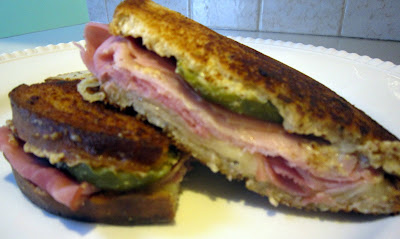 (Apologies for the blurriness!)

A good Dijon or Deli mustard, about 1 tsp
Mayonnaise (I used Hellman's) about 1 tsp

On a cutting board butter one side of both slices of bread -- this will be the outside of the sandwich
Flip the bread over and place the cheese on one half and the mayo and mustard on the other half
Place ham on the mustard and the pickles on top of the ham
Place the cheese part of the sandwich on top of the ham half
Heat a small pan, when hot add the sandwich and turn the heat down slightly.
You want your sandwich to have a nice brown to it, but not burnt!
After checking for done-ness flip the sandwich over and brown the other side.
Cook well so that the cheese is fully melted and oozy. You might want to monitor this as sometimes the bread will be done but the cheese won't. If this is the case, just turn the heat down and cook a few more minutes.

When the sandwich is cooked to your liking remove, cut in half and serve immediately!

Mmmmm sounds so yummy!
I used to work for a company owned by Jewish people and they would bring lunch in most days...omg the deli sandwiches were TDF! I have never had a sanwich as good as those!

These look too delicious! Trying them out tomorrow for lunch!