Cinnamon Apple, Raisin and Cranberry Oatmeal -- A Breakfast to Warm Your Soul! We're always in a rush, it seems, these days. We never seem to have the time for a proper breakfast. As the kids race out the door I toss assorted granola bars their way. Too much sugar, I know. I do make the effort to read ingredients in the stores so that I know that they are loading up on protein, minerals and fiber. So all is not lost. It's not like I'm tossing cookies their way. Close, but not quite.

On Saturday we had to leave the house, for two wakes sadly, at Noon. I need to get something filling in to the children. I needed something that would not leave them feeling empty and hungry an hour later. They love oatmeal (not the instant crap) but get bored with it. I decided if I added lots of "goodies" to the mix they'd be a bit more enthusiastic.

I tossed in some dried cranberries, raisins and apples. I had the apples sit in a mixture of cinnamon and brown sugar for a while so that the apples would be nice and sweet before I even cooked the oatmeal. 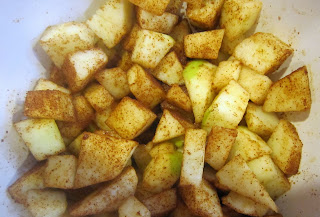 I made enough oatmeal, (following the directions on the box) for all of us. I added a handful of raisins and cranberries to the water as I let it boil so the fruit would plump up and get juicy.

As the water rolled to a boil I added the oats, the seasoned apples and oodles of brown sugar.

Our wholesome breakfast tasted more like dessert! Not a drop was left over!

1/2 Cup of dried cranberries
1 Granny Smith apple, peeled, seeded and cut into small cubes
3Tablespoons plus 1 teaspoon of brown sugar (or to taste)
1 Teaspoon of cinnamon