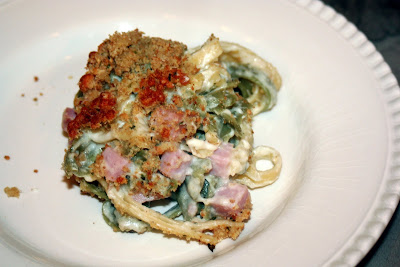 Casseroles were popular when I was growing up. They were hearty and nutritious. They were easy to make and could be prepared fairly quickly. Even better they could be made ahead of time, refrigerated or frozen and then taken out and placed in a hot oven when needed. My mother made slews of casseroles when I was a young child in the 70s. Many of these were her mother's recipes that she made her children in the 50s and 60s.

I'm not sure where this recipe comes from (both my mother and her mother hailed from the Rochester, NY area) as I have tried researching it. It seems worthy of reintroducing. It was a favorite of mine as a child. I love the color of the green noodles with the pink of the ham!

This recipe serves 8. You can serve it in a large casserole or two smaller ones, which is what I did.

*In a large pot cook noodles, til al dente (per directions on package)
*While noodles are cooking cut ham into small cubes
*Pour sour cream and milk in a smaller pan and heat slowly -- because this is low fat, this could curdle so heat the cream mixture slowly
*As the sour cream mixture heats, in a small bowl add 1 to 2 Tsp of sour cream to the flour, mix well and then add to the pan
* Bring mixture to a boil, remove from heat and add 1/2 of the cheese mixture, salt and pepper.

*When the pasta is ready, remove from heat and drain, then return to pan and add the cream and cheese mixture
*Add ham to noodles and mix well
*Place mixture into one or two casserole dishes (oven safe!)
*Combine the remaining cheese with the bread crumbs and sprinkle them over the top of the casserole you will be serving.

Place casserole in a preheated oven, 325 degrees, for about 15 to 20 minutes so that the top is golden brown and the noodles are reheated throughout.

For a previously refrigerated casserole, bring to room temperature and then bake for 30 - 40 minutes in a 400 degree oven.

** A mild white cheddar may be substituted 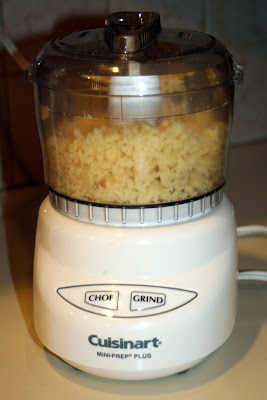 I grated my own Swiss cheese 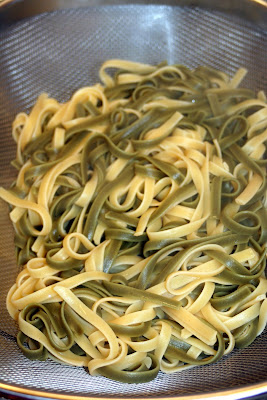 I used both the green and the white fettuccine 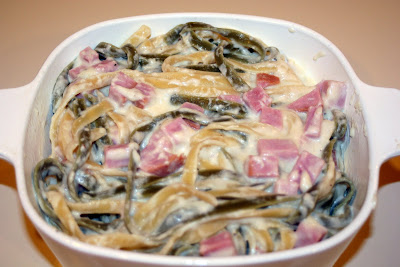 In the casserole, with the ham before the cheese was sprinkled on top 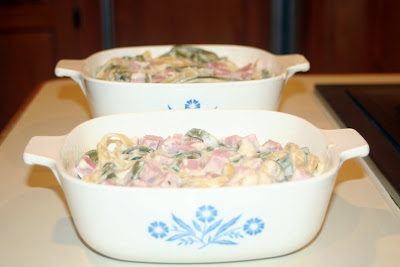 I even brought out my old Corningware dishes reminiscent of the era!
Posted by Jessica Ryan at 2:22 AM
Labels: casseroles, comfort food, ham, pasta, sour cream, Swiss cheese

thanks for the recipe...I have done mac& cheese w ham, but never thought of Fettucine and swiss...

Always looking for a new meal...

so retro! my people would love that - I'll have to file it away.