Paella (pronounce pie-aye-ah) is a Spanish dish, originally of the Valencia region. Typically it consists of several types of meat such as chicken and sausage (chorizo) and various types of seafood such as clams, mussels, lobster and shrimp. A soufrite is a tomato based sauce that serves as the flavor and essence of the dish. A good soufrite can often take hours to make. Rice is then cooked in the soufrite and then the seafood and meats are added. It's a wonderful dish. My husband has a fabulous recipe which I will share at some other time.

I had some chicken and some sausage to use the other night and thought I might make a much easier, faster version of paella that promised to be equally as tasty. I gave my dish a Mexican flare and instead of slaving over a soufrite I used salsa! What a wonderful burst of flavor it added... instead of the saffron, I added cilantro. And black beans and corn. And shrimp. Our quick and easy shortcut was nothing less than spectacular and was devoured by the entire family.

From start to finish the dish took no longer than 30 minutes. 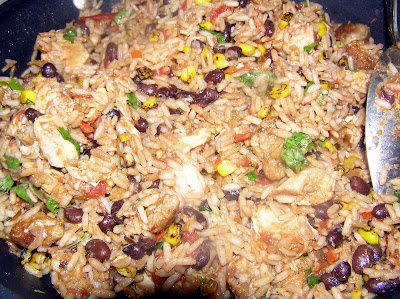 In a large saute pan add about 1 tbs of olive oil. Turn pan to high to heat the oil, then as soon as it starts to sizzle turn the heat to medium and add the chicken. Coat each piece with a little sea salt and a good shake of garlic powder and cook until it browns. When browned sufficiently remove from pan onto a plate lined with a paper towel. Set aside.

Add a drop more of olive oil and add the rice. Cook until the rice browns slightly, then add the fresh salsa and water. Cook per directions on the box, until the water is absorbed and the rice is cooked. If needed add more water.

When rice is cooked, turn heat to low and add chicken, sausage, shrimp, beans, and corn. Keep on low heat. Chop cilantro, about a handful, and sprinkle over the rice mixture prior to serving.
This dish is so simple and yet so easy to make!
Posted by Jessica Ryan at 7:34 PM
Labels: black beans, chicken, cilantro, corn, Mexican, paella, salsa, sausages, shrimp

Yum! My family loves this ~ I really should make it more often.