My apologies as I have no pictures of any of the final products... I had completely forgotten!

When planning a sit down meal for 13 people, 5 of them children, I needed to come up with a menu that was pleasing to children and adults alike... something that could be prepared fairly quickly with three kids snapping at my heals. Times like these require help and shortcuts.

While I love to make my own dressings and marinades, there are some prepared varieties that are so spectacular that you are better off going with those.
This is my Secret Sauce. It is nothing less than fabulous!

Prepare your chicken as you would for your favorite BBQ sauce. I like to offer smaller pieces, roughly the size of my palm, with the option of returning for more. (I do have small hands!) I place the chicken in a marinating dish and let sit 3 - 4 hours so that the marinade really has a chance to penetrate the meat. Grill as usual and enjoy. Or you could cut your chicken in to strips, thread a skewer through the meat and voila, a chicken lollipop that the kids will adore!

1 lemon
2 packets of sugar or Splenda
4 Tbs. low sodium soy sauce
4Tbs. natural peanut butter
1 tsp. garlic powder
4 Tbs. water
dash of crushed red pepper or cayenne pepper
I made my own Peanut Sauce as it is incredibly easy. I doubled this recipe and placed it in small ramekins on the table.

The Secret to my Asian Salad is Marie's Sesame Ginger salad dressing. It doesn't stray from those dressings found at the best Japanese restaurants. 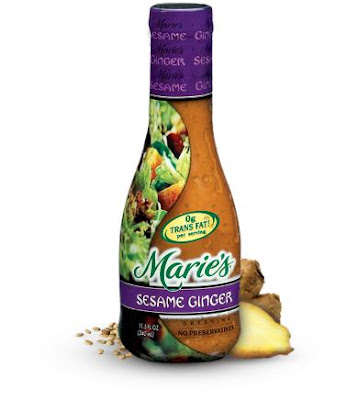 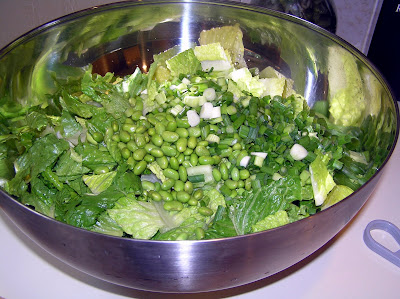 2 heads of Romaine lettuce, lettuce cut into 1 inch pieces -- I slice right across the lettuce and break the leaves up in the salad bowl
4 or 5 scallions, trimmed, using both green and white parts
1 cup of petite peas -- if cooking prior to making salad, let cool fully before adding to the lettuce to prevent leaves from wilting
1 cup of shelled, cooked edamame
1 cucumber, cubed
1 large handful of raw pistachio meats
6 asparagus stalks, diced, tips removed (I cooked them prior-- in boiling water 3 minutes. DO NOT overcook) 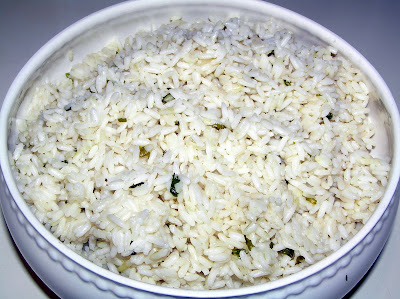 I used regular Uncle Ben's rice and followed the cooking instructions on the box.
I added 1 tbs. olive oil to the water
and 1 good dash of sea salt prior to the water boiling.

While the rice was cooking I chopped up some cilantro, about 2 heaping Tbs. (You can add more or less as you like.)

After the rice was cooked I stirred in the cilantro and let it sit until it was time to serve. I quickly reheated it in the microwave for 1 minute 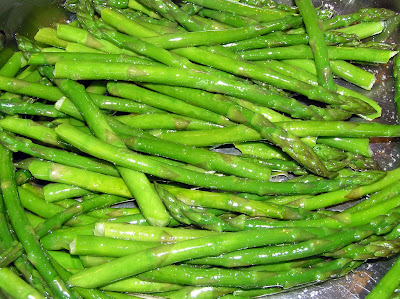 2 bunches of asparagus ends trimmed
1 dash of sesame oil
1 Tbs. olive oil
dash of garlic powder, to taste
dash of sea salt, to taste
Clean and trim asparagus
Place in large saute pan, in boiling water for 3 minutes, no more!
Remove from water, drain well
Replace to saute pan
Add the oils, seasonings, stir well so that all the stalks are covered
Saute lightly over medium heat for another minute or two.
Remove pan from flame.
May be served hot or at room temperature.

My mother in law brought the pies... they were absolutely fabulous. I can get the recipes for those who wish.
The kids made the vanilla ice cream using our LLBean Ice Cream Ball. We followed their recipe.
1 quart cream or half and half
3/4 Cup of sugar
1 Tbs. vanilla
It was mighty tasty, especially on the home made pie!

That meal looks so yummy! I will definitely have to make it for my family soon! If you could post the blueberry pie recipe that would be great!

Ok this is truly a plan for our family! Sounds wonderful, and we like all the ingredients! Thanks so much.

You are such a good wife! What a nice lunch. xoxo