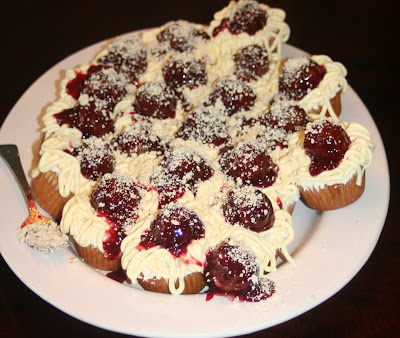 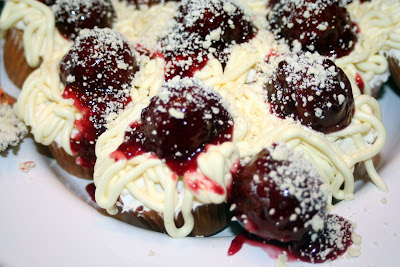 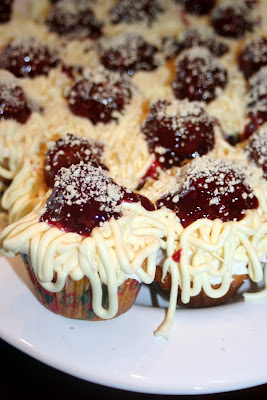 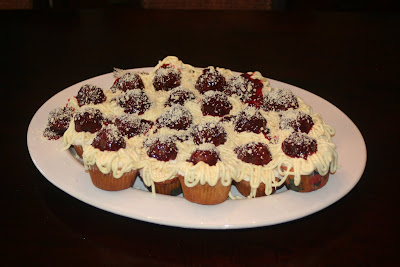 Christopher had his eyes on these a month ago. This is what he wanted for his class party. It fits his personality -- ever the jokester! The idea came from the Hello Cupcake cookbook (bible!) and they could not have been easier to make! I used a boxed cake mix to make 21 cupcakes and 2 containers of white frosting with 2 drops (no more!) of yellow food coloring in frosting. I placed all the cupcakes on a platter so that they were touching and frosted them lightly. Then using a small pastry tip I attached it to a plastic bag (Ziploc) and squeezed the frosting out to have it resemble spaghetti! Oh what fun that was! Then I used a chocolate donut hole from a local bakery and cut each one in half. I rolled them in a mixture of strawberry and raspberry preserves (3/4 cup) and placed each "meatball" on top of the spaghetti. The grated Parmesan was created by taking a handful of white chocolate chips and placing them in the mini food processor until the result I wanted was achieved! I sprinkled the cheese on ever so gingerly! The original recipe calls for the Ferraro Rocher chocolates, but our school is a nut-free one, so I went with the donut holes -- I think I like my choice better. And Hello Cupcake suggested grating a block of white chocolate with a grater. I did not have a block of white chocolate and I did have the chips. I thought my idea achieved equally as good results.

Pssst... Fairy Godmother... you should check your cookbooks for copyright... don't wanna get caught disseminating stuff you shouldn't...


Hilarious cupcakes, in any case!

I think I am OK since I am Sourcing the cookbook... I had to disseminate due to nuts which are not allowed in our school. It's not like I took their idea, and passed it as my own.

Lots of cookbooks have no reproduction clauses, that's all. Just don't want you to get burned! I wasn't suggesting plaigarism, just copyright infringment (only because I noticed this on one of my cookbooks recently...)

Pssst...Entertaining Kitchen. Thanks for disseminating that cupcake idea. As one of the authors of Hello, Cupcake! I can tell you nothing makes us prouder than to see our cupcakes in your kitchen. Your project looks fantastic. Loved the mini-processor idea and the chocolate donut holes too. That is a great solution for the nut issue. We really enjoy seeing all the different ways folks are using candy and snacks to make the projects their own. And thanks for the credit, you are absolutely right. Most publishers and authors just ask that you source the material as you did. Congrats and keep on cupcaking!

Jess, i wanna be like you when i grow up. Loved the cupcakes as did M when she saw them.

Cole likes them, I think. He saw the picture, screamed, "Cupcake!" and proceeded to make slurping noises at the screen. :)

These cupcakes are fabulous!!! Well done!!!