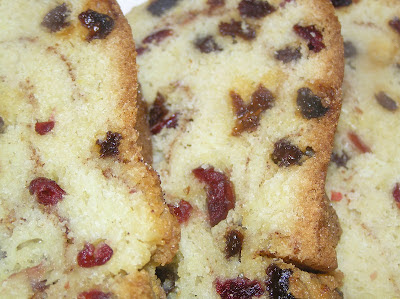 I told my friend Beth I would watch her kids this afternoon (my kids love her kids) so that she could pack for her family trip to the Outter Banks. I was more than happy to offer to do so. Suddenly I panicked that I had nothing for the kids to snack on. Her son is highly allergic to peanuts and I was terrified of serving anything potentially dangerous, anything that might contain traces of peanuts -- heck, even anything that might contain traces of traces of peanuts. I thought the best thing to do was to bake something from scratch so that I could have control over all of the ingredients.

I wanted to bake my Blueberry Cake but had neither the blueberries nor the orange juice that the recipe called for. I decided to improvise. I found some raisins and some cranberries. I substituted the orange juice for milk and added a bit more. The result was incredible. So much so that I have less than a quarter of the cake left! I gave a slice to Don, and after his first bite he said "Go get a camera. You need to put this on your blog!" And so here it is.

3 Cups of all purpose flour
slightly less than 2 cups of sugar, plus
*5 Tbs of sugar mixed with
1 Tbs of ground cinnamon
1 cup of salad oil
1/3 cup of low fat milk
4 eggs
3 tsp vanilla
3 tsp baking powder
3/4 cup of dried cranberries (Use 1 + cup of fresh cranberries if you can!)
1 cup of raisins

-- Place all ingredients in a bowl except the ground cinnamon and sugar mixture, put those in a small bowl separately.

-- Mix all the mixing bowl ingredients together until all is well blended.

-- Grease a bundt pan well with butter and flour or Pam

-- in the small bowl mix the Cinnamon sugar mixture

-- in between each layer spoon generous amounts of Cinnamon sugar mixture, covering the layer completely.

-- spoon in remaining batter and repeat (as necessary) with the Cinnamon sugar to create Cinnamon swirls. 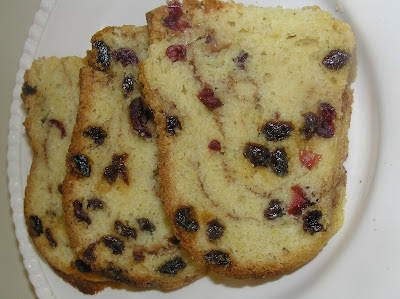 -- Let pan cool completely before trying to remove cake. (Otherwise it will crack and split. It will still be delicious but not as beautiful!)

Oh my gosh, that looks sooooooo good!! I would have never thought to do that, but I have extra of all these ingredients!!! Totally putting this on my list of things to make! Thanks!!

You are so welcome!